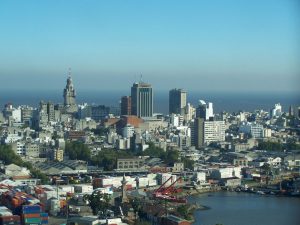 Montevideo has many real estate choices

Ranked first in the Latin American region for democracy, peace and quality of living, Uruguay is also a high-income, transparent country with broad real estate appeal for investors seeking stable returns for modest outlay.  This makes Uruguay real estate a popular investment for locals and foreigners.

We have highly qualified and experienced real estate buyer’s agents located in Uruguay.  Please contact us for prices of real estate for sale in Uruguay, as well as current rental rates. 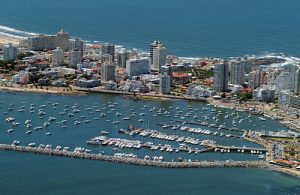 Punta del Este – located 120 miles from Montevideo, Punta del Este is a city and resort on the Atlantic Coast in the Maldonado Department of southeastern Uruguay. The city has a year-round population of around 9,000 but experiences a massive tourism influx and related economic boom every summer. The resort has its own real estate economy because of its exceptional appeal as both a lifestyle destination and an incredibly consistently returning investment hotspot.

Montevideo – the capital and largest city in Uruguay is Montevideo and according to Mercer, it offers the best quality of life of all cities in Latin America.  Therefore it’s unsurprising that it is of exceptional appeal to international investors.

Colonia – the Uruguayan department of Colonia is in the Río de la Plata region.  It’s capital is one of the oldest cities in Uruguay, Colonia del Sacramento which is exceptionally attractive and appealing, it’s a World Heritage Site and one of the leading tourism destinations in Uruguay and Latin America.

The city faces Buenos Aires and enjoys daily ferry arrivals from the Argentine capital; it is therefore the primary entry point for tourists from Argentina.

The Ocean Esplanade is popular with investors seeking tourism-facing stock.  Alternative investment opportunities exist throughout the department of Colonia including in the farm belt, where the diversity of crops, land and even field types available are appealing to increasing investor interest.

Piriápolis – this is also a very important summer season resort in Uruguay, and its appeal pre-dates that of Punta del Este. Located about 60 miles from Montevideo, Piriápolis is on the Río de la Plata coast.

Piriápolis is described as ‘a laid-back beach enclave’ and was originally developed to resemble a French coastal town. The extended resort of Piriapolis stretches for some 15 miles and includes seven beaches, of which Playa de la Rambla and Hermosa are the most popular with the summer season visitors.

Farmland and Chacras – Small farms in Uruguay are called chacras. The farmland in Uruguay is very productive and many people choose to live on chacras due to the productivity. Also chacras offer tax breaks which can substantially lower property taxes. Finally, there are some great large scale farmland and agricultural investment opportunities as well. 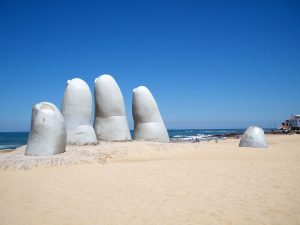 Playa Brava has the famous hand

Uruguay is the second smallest nation in South America where cows outnumber humans, but what it lacks in size and population density it certainly more than makes up for in terms of its broad appeal.

In terms of the lifestyle available it is first world, progressive, safe and free; and because Uruguay has the freest political and labor conditions on the continent, has a diversified economy and welcomes international citizens of all ages and nationalities, it’s very easy to make Uruguay your home as an expatriate.

With beautiful old colonial towns and well-established high-end beach resorts, a moderate year-round climate and a very stable real estate market, Uruguay doesn’t have to try too hard to attract expats looking for a fabulous place to live, or investors seeking a secure investment environment.

Uruguayans are largely of European descent, and generally they are well educated, friendly and open people keen to welcome new faces to their beautiful nation.  Many speak English as a second language, making living in Uruguay easy particularly for expats who herald from North America or the UK for example.  Otherwise, the main language is Spanish.

Those who choose to retire to Uruguay can enjoy a high standard of living in a country proud of its stunning and untouched natural environment, where the sea or the hills are never much more than a 30minute drive away from your home, and where everything from infrastructure to healthcare are first world.

The cost of living in Uruguay needs a mention however, imported goods are highly taxed for example, and Uruguay’s sophistication and quality of life has to come at a fair price.  Finally, there’s often a relatively lengthy bureaucratic process involved in the majority of transactions – from getting your local ID to getting utilities connected for example.

Uruguay (or República Oriental del Uruguay) is located in the southeastern region of South America.  It’s bordered by Argentina to the west, Brazil to the north and east, and the Atlantic Ocean to the south and southeast.

The nation is home to approximately 3.3 million people, of whom 1.8 million live in the metropolitan area of Montevideo.

Uruguay has over 400 miles of coastline, 10 national parks, and the majority of its landmass is rolling plains, low hills and very rich and fertile coastal lowlands.

The climate is largely uniform nationwide and considered humid subtropical.  Northwest Uruguay has arguably warmer summers and milder, drier winters than the rest of the nation.

Uruguay is divided into four regions and multiple departments.  The regional divisions are based on social, economic, and geographical factors.

Register for our newsletter to receive updated information on real estate investment in Uruguay and be notified of new property listings.

Register as a buyer if you are interested in buying real estate in Uruguay.

Register as a seller if you have property for sale or rent in Uruguay and want to list your property for free.

Contact us about becoming a buyer’s agent in Uruguay in partnership with LatinCarib Real Estate.

Browse our Uruguay real estate listings below for more information on any property listings in Uruguay that interest you. 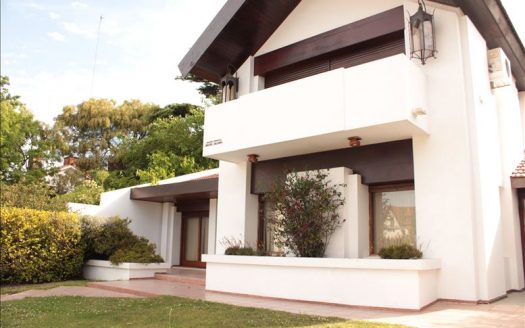 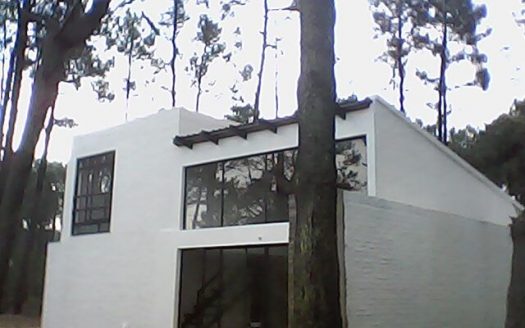