Merida Mexico was founded in 1542 and contains a mixture of Maya, French and British influences. Located 4 hours from the coast, it is a city with a rich cultural life, great weather, and top class medical care and hospitals. Along with many theatres, museums, art galleries, parks and traditional Mexican and Yucatec food, you can begin to see why Forbes has voted Merida as one of the best cities to live in several times – This has brought in investors for Merida property investments – and this is also why many Canadians and American expats have chosen to make Merida their home when they decide to retire in Mexico. Merida real estate for sale has everything from old colonial houses with courtyards to modern condos for sale.

Why is Merida real estate so popular with expatriates? A lot of it has to do with Merida’s location, road infrastructure and its competitive prices for land. The Merida real estate prices here are lower than parts of Mexico that are popular destinations for tourists, which is one of the reasons it is becoming a popular place to for Mexico retirement.

The local real estate in Merida has bounced back from the recession that struck almost a decade ago, and the heavy financial and commercial activity here has led to much growth. This is most evident in the northern end of the city, which contains new modern housing developments and high rise condos. Much of the population of this area is made up of former residents from around the country, many of whom are wealthy. 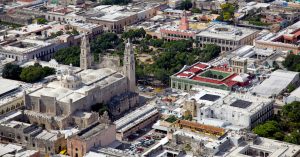 Once you’ve decided upon settling here and buying a home or condo in Merida you will be faced with an array of different styles from which to choose from.

Colonial houses in Merida were built after the arrival of the Spanish in 1592. They have semi-circular arches, Tuscan and Roman columns and use masonry for the walls. They have street level balconies and front walkways, with white pillars at the entrance and elegant front yards.

French inspired mansions in Merida take inspiration from Europe and New Orleans. You will see this style of Merida real estate in an area of town called Paseo de Montejo, which has a mixture of styles that is eclectic. This neoclassic, French, baroque and neo-gothic. Entrances are above-ground level and far from the road, with a stairwell leading up and a double high ceiling. There will likely be much ornamental use of iron and wood, in addition to colonial arches and courtyard gardens 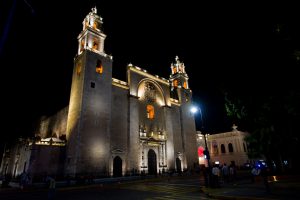 The Art Deco style is popular with real estate in Merida and is from the 1930’s. In Merida property the influence is recognizable on houses with verticality in the façade and rectangular block forms arranged in geometric patterns. They also have curved ornamental elements and are often made from stucco, concrete, smooth faced stone and Terracotta. They are very modern, utilizing steel, aluminum, and glass.

Midcentury homes tend to be functional and lack ornaments. They have flat, extended roofs with low ceilings and large terraces.

Modern Merida real estate developments can be found in the north end of the city. They are built with simplicity in mind, with a spacial design that is often in a grid pattern. They is a lot of contrast between light and dark, and a wide range of styles mixing old and new.